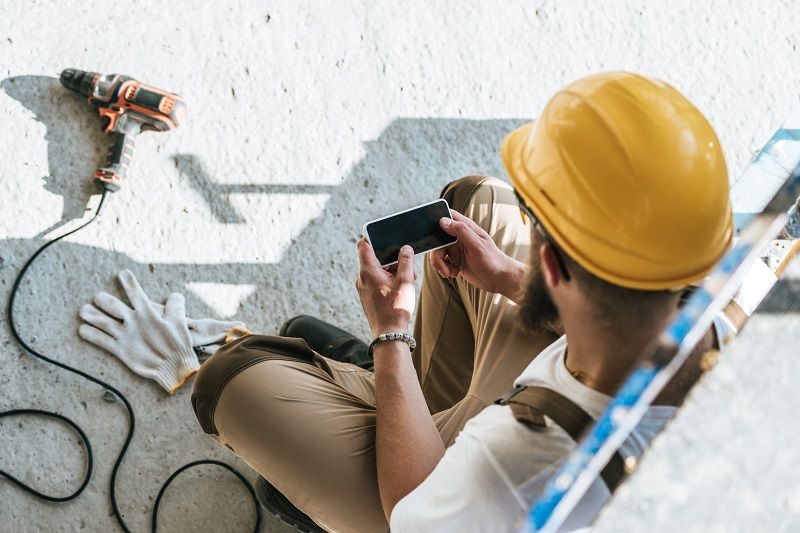 The short answer is yes. They definitely can be! While there are so many ways a phone can help craftsmen on site, phones can cause a lot of problems on the job. There is no formal regulation from OSHA that prevents cell phone use on a construction jobsite, so organizations like Associated Builders and Contractors have publicly encouraged members to create policy and train their employees on the appropriate use of this technology in and around the jobsite. If your company doesn’t have a policy around this matter, you may need some guidance on how it’s best used. Here are a few ways that the phone is being used on a construction site, and whether we recommend it or not:

Not a good idea. Especially if you’re listening while working. When someone’s focused on their music or a podcast, they probably can’t hear a colleague or manager that’s asking them for help. And to be clear, OSHA has even gone so far to say that personal headphones and earbuds do not count as protective ear devices.

For the most part, we think apps on a jobsite can be really useful. There are so many apps  meant specifically for the construction industry that can help with time-tracking, creating reports, punch-lists, measuring, and more. Many of them allow you to share documents and project updates with others on the team – all in one place and accessible online!

It’s just not safe to be walking around a jobsite and checking your Twitter or Facebook feed. Almost any reason for using social media can wait until you’re off the job. And if you have a concern about safety or other sticky situations on the job, we recommend you tell your supervisor – don’t share it publicly on social first! You could make a bad situation worse by not following your company protocol when it comes to safety.

The camera can be very helpful on a jobsite, as long as you use it responsibly!! Many of the previously mentioned construction apps can be used to take photos, videos, or sketches, which can be shared directly through the platform. Use good judgement here, however! There was a reported instance where a picture of an injured craftsman was shared online and then it got back to the family before they were officially informed.

Using the phone for its main purpose – talking to friends and family not physically present – is generally not recommended on the job site. It’s just another distraction that can keep you from noticing a real safety hazard happening around you. If you’re waiting for an important call from your child’s caregiver or sick relative, then schedule a call when you can go off site on a break. Or make arrangements with your manager to check your phone at a certain time, for example.

A construction jobsite generally requires you to be paying attention so that you can be safe and do your job! Contact Madden if you’re ready to focus while on a construction job site. We can match your skills and talents with employers who need them for their next building project!